Recently returned from my fourth trip to Madagascar – the world’s fourth largest island – I thought I’d share with you some information about the Malagasy language.

The first people arrived in Madagascar about 1500 years ago from Indonesia/Malaya via Southern India and East Africa using outrigger canoes, and as a result Malagasy belongs to the Malayo-Polynesian language group. It’s the westernmost member of this language branch, which also includes Malaysian, Tagalog, Indonesian, Maori and Tahitian. The Indonesian origin shows strongly in the language, which is spoken and understood, with regional variations of dialect, throughout the island. The linguistic influence of later migrations from Africa can be seen in coastal populations, where there are slightly more Bantu-Swahili words than elsewhere on the island. 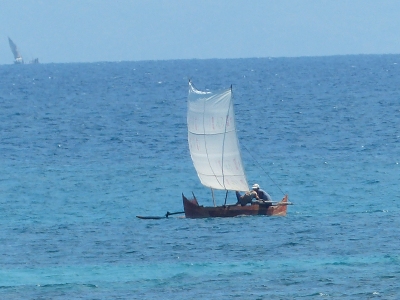 The British held some influence in the country in the early 19th century, resulting in words for some religious terms such as pastaora for ‘Pastor’ and words like hotely, boky (‘book’) and banky. The island was a French colony from 1896-1960 and French left a linguistic legacy in words such as bisikileta for ‘bicycle’, and savony for ‘soap’. (Other influences to be found are Arabic, for example, in the days of the week, and Bantu-Swahili in the words for domestic animals, indicating that the early settlers, sensibly enough, did not bring animals with them in their outrigger canoes.) Eighteen major dialects are spoken, the two main ones being Merina, which is considered standard Malagasy, and Sakalava (Ethnologue considers these dialects to be separate languages – see below).

Malagasy is a language full of images and metaphors, and the art of oratory, kabary, as well as poetic histories and legends are an important part of the culture. Literal translations of Malagasy words and phrases are often very poetic. Dusk is Maizim-bava vilany: ‘darken the mouth of the cooking pot’; two or three in the morning is Misafo helika ny kary: ‘when the wild cat washes itself’.

Although an Arabico-Malagasy script was in use from the 15th century onwards, in 1823 King Radama 1 opted for an alphabetisation with Latin characters. The Malagasy alphabet is made up of 21 letters; C Q U W and X are omitted, thus A E I and O are the only vowel sounds. When a word ends in a vowel, this final syllable is pronounced so lightly it is often just a stressed last consonant. For instance the Sifaka lemur is pronounced – rudely but memorably – as ‘she-fuck’.

Sentence structure is verb + object + subject; however many objects there are, the subject is always at the end. This is quite a rare word order – only 10% of the world’s languages place the verb in initial position, and only a dozen languages are known to regularly place the subject in final position. An example: mivarotra akondro izy, literally ‘sell’ (present tense) + ‘banana’ + ‘he/she’ i.e. ‘he/she sells bananas’. There is no grammatical gender or plural form – the article ny is used (like ‘the’ in English). There is no verb “to be” in Malagasy, so adjectives imply the use of ‘to be’ indirectly.

Malagasy can seem challenging for a visitor as for example place names may be 14 or 15 characters long (because they usually have a literal meaning, such as Ambohibao ‘the new village’, or Ranomafana ‘hot water’). Surnames are also very long – up to 24 letters – again because each part has a literal meaning, and traditionally there used to be only one name – no separate first name and family names – although European influences are now changing this.

Outside of Madagascar Malagasy is only spoken by any great number in Mayotte and the Comoros Islands. There is however at least one Malagasy loan word in English that everyone knows: raffia.