Sorting through some old papers I came across this article from a local newspaper dated 22nd July 1993. The person to the right in the photo is me when I had not long turned 23 and this was one of my first major liaison interpreting contracts: for a week I interpreted for an American architect from Louisiana who had been invited to Reunion to compare Creole architecture in the Southern US with that of the island. I remember that I worked hard compiling my glossary and terminology list and that it came in very useful, but I also cringe when I think about how inexperienced I was!

Do you have any cringe-worthy photos, memories or experience to share too? 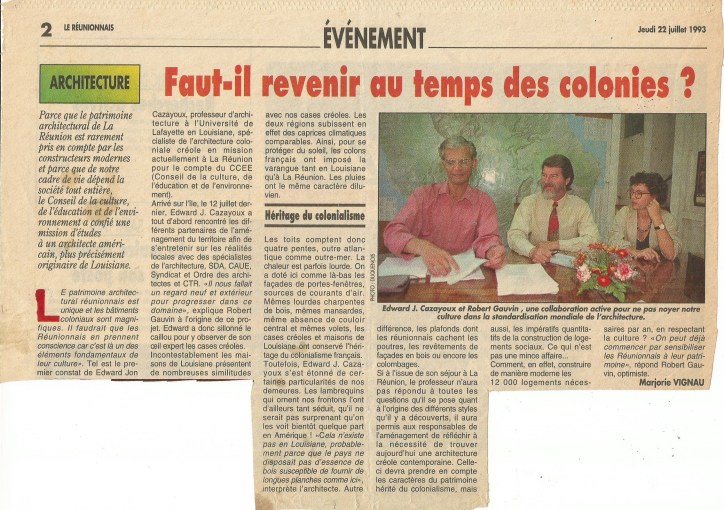 Over at Cibliste, colleague Sadie Scapillato recently posted “Ten questions for translators” in effort to learn more about her fellow linguists. What a great idea! She also posted her answers to the questions. Here are the questions and my own answers:

1. Four-parter: Where do you live? What are your language pairs? How did you learn those languages? What types of documents do you translate? I’m originally British but I live in Reunion Island in the Indian Ocean, and have done so for 19 of the past 23 years. My language pairs are French to English and occasionally Reunion Creole to English. I learnt French at school and university and then really became fluent after moving to Reunion. I picked up Reunion Creole while living here. I mainly translate general business documents, but I also specialise in shipping and logistics, and anything to do with Reunion and the SW Indian Ocean islands. 2. Do you do other language-related work? I sometimes do proofreading work, and I occasionally interpret.

3. What do you like most about translating? least? I enjoy knowing that my work helps people of different languages and cultures to communicate and understand each other. But I don’t always like the unreliable aspect of freelance work (not knowing where your next job will come from and whether you’ll get paid on time!).

4. What are your future dreams or goals, professionally speaking? I think the goal of producing good translations and having satisfied clients goes without saying. I want and need to continue learning (both in translation and business), and I’d also like to become a sworn translator within the next year or two. I’d like to see my name in print one day, but not necessarily as a literary translator.

5. What do you think: do all translators need to specialize? It helps, but it’s not always necessary for all translators. To take an example from another profession: some doctors are specialised, but we also need general practitioners too.

6. What is your #1 tip for new translators? Be confident about yourself and your abilities (but know how to accept criticism).

7. What is a translation-related lesson you’ve learned on the job? Don’t be afraid to say no.

8. What book(s) are you reading right now? Because I live in my source language country and already have a lot of exposure to French I try to make sure I read at least two books in English for every book I read in French. Right now I’m reading a collection of short stories by O. Henry. I like international literature, and recently I amused myself by compiling a list of books I’ve read from different countries around the world.

9. Do you have a blog or other online presence where we can learn more about you? Any favourite links or tips to share? My blog about language and translation is A Smart Translator’s Reunion and I’m also on Twitter, Facebook and Google+. Tip: I would definitely encourage linguists to use social media. You may or may not find work that way, but as – generally isolated – freelancers it’s important to know what’s happening in the (translation) world.

10. What’s one non-work-related tidbit your virtual colleagues might like to know about you? I’m an avid traveller (57 countries visited; see my travel blog at http://travelssmart.blogspot.com) and passionate about scuba-diving (I’ve dived in 18 different countries)! 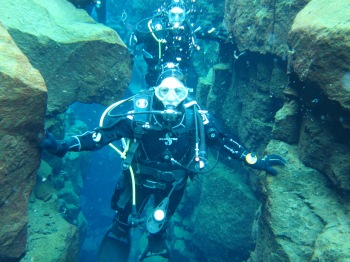 For more answers to the questions see also:

Feel free to leave your own answers to the questions in the comments below or at Sadie’s blog post.

Have you ever translated your own work? I’m not a professional writer by any means, but I have translated some of my own travel articles from English into French and from French into English [1]. Defined as “the translation of an original work into another language by the author himself” [2] self-translation has been called “another vast territory without history” [3] as it has only recently become of interest to researchers.

While self-translation (also called ‘auto-translation’) exists in many fields, most research and writing on the subject concentrates on writers, i.e. literary self-translation. Here’s a list of some well-known writers who’ve translated their own work: Nabokov likened self-translation to “sorting through one’s own innards and then trying them on for size like a pair of gloves” (!)[4], while Beckett talked about the “wastes and wilds of self-translation” [5]. 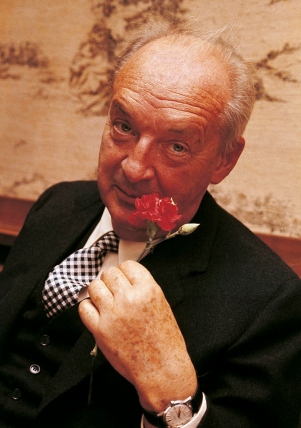 Self-translation may be regular or sporadic; an example of the latter is James Joyce who self-translated two passages from his Work in Progress (later entitled Finnegans Wake) into Italian [6].  Self-translation generally supposes bilingualism or near-bilingualism in at least one other language, and the target language may vary according to whether the writer is translating into their mother tongue or second language. It may take place simultaneously or consecutively; Samuel Beckett for example published his French translation of his 1938 novel Murphy ten years later, although he also practised simultaneous self-translation. If simultaneous self-translation does take place, the two versions may influence each other during writing. Authors may self-translate from a minority language (e.g. Sicilian, Basque or Gaelic) if they want their work to be known in an internationally recognised language like Italian, Spanish or English, but conversely they may self-translate from a widely-spoken language into a minority language in order to avoid cultural domination of the source language. (The problem with the latter situation however is that if published in a bilingual edition, readers of the dominant language tend to ignore the minority language).

Irrespective of their actual qualities, self-translations are often considered superior to non-authorial translations. This is because “the writer-translator is no doubt felt to have been in a better position to recapture the intentions of the author of the original than any ordinary translator“[7] i.e. due to their thorough knowledge of the original text self-translators have the authority to allow themselves shifts in the translation which might not have been ‘allowed’ by another translator. Self-translators don’t reproduce in one language what they have created in another – they will produce a complementary literary text with its own echo and effect in the target language and culture [8]. But with self-translation how do you define what is the ‘original’ and what is the ‘translation’, especially if the two texts were written simultaneously?

How do you differentiate between the act of writing and the act of translating? Raymond Federman, discussing Beckett, suggests as follows:

The original creative act (whether in French or in English) always proceeds in the dark … and in ignorance and error. Though the act of translating, and especially of self-translating, is also a creative act, it is performed in the light (in the light of the existing original text), it is performed in knowledge (in the knowledge of the existing text), and therefore it is performed without error – at least at the start. In other words, the translation of a text reassures, reasserts knowledge, the knowledge already present in the original text. But perhaps it also corrects the initial errors of that text. As a result, the translation is no longer … an approximation of the original, or a duplication, or a substitute, but a continuation of the work, of the workings of the text. (emphasis in the original) [9]

Here’s an excerpt of one of Beckett’s self-translations, published in French in 1957, and in English the following year [10]:

What about you? Have you ever translated your own work? Have you read any self-translations? Let me know in the comments.

[1] From English into French: North of the Border, Steppe-ing Through Mongolia, Vladivostok To Moscow : Travelling Across A Quarter Of The Globe by Train; from French into English: Lieux sacrés de Tibet.

[2] Anton Popovic, (1976) Dictionary for the Analysis of Literary Translation, Edmonton: Department of Comparative Literature, The University of Alberta, p. 19 quoted in Self‐Translation: A History of Practices and of Research Practice

[3] Julio-César Santoyo (2006) Blank Spaces in the History of Translation, in Charting the Future of Translation History, Edited by Georges L. Bastin and Paul F. Bandia, University of Ottawa Press

[8] Translating the Exiled Self: Reflections on Translation and Censorship by Samar Attar in “Intercultural Communication Studies XIV: 4 2005” p. 139