END_OF_DOCUMENT_TOKEN_TO_BE_REPLACED

I recently took a trip to Mauritius, a place I know fairly well as it’s Reunion’s neighbouring island, but where I hadn’t been back to since 2001.

Mauritius doesn’t have official languages, although English is the ‘unofficial’ official language, used for business and government, and French is used more in culture and education. However inhabitants’ native language is Mauritian Creole, which although still French-based, is sufficiently different from Reunion Creole for me to have trouble understanding it (although of course I’m not a native speaker of Reunion Creole; mother-tongue speakers of the latter have less trouble understanding Mauritian Creole than I do).

Mauritius has its own Google, available in Mauritian Creole.

Generally speaking Mauritians will spontaneously address a foreigner in French, but switch easily to English if that foreigner is non-French speaking. However the Mauritian bilingualism can sometimes lead to confusion, such as on the following sign which mixes the English “sale” with the French “chemise”, with amusing consequences if you understand both languages.

Another sign also made me smile, as the writer had obviously forgotten the English word ‘butt’ for a cigarette end while writing it! 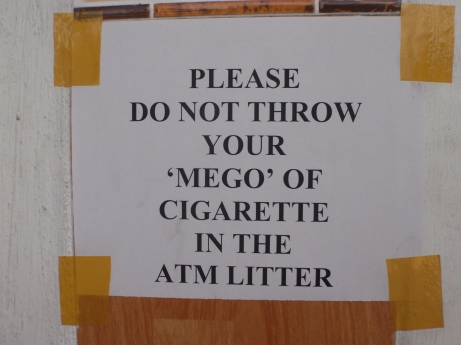